The Amperclef (or, Why I Don’t Write Ampersands)

I have nothing against the ampersand. In fact, I think it’s one of the most interesting characters in all of typography—it may even be my favorite. Even the etymology of its name is a story worth telling. The problem is, it’s too similar to the treble clef: 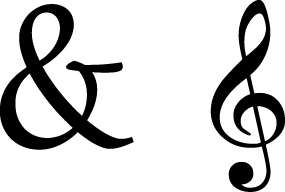 Just as a speed skater might misjudge a turn then careen and career out of bounds, the initial tendency to curve the first downstroke to the left—reinforced by years of writing treble clefs—rather than to the right, is nearly impossible to resist while in the heat of writing. The sheer force-of-will required of me to correctly render this character—which even at my most successful could only (generously) be described as an amperclef—has caused me to all but abandon it.

It’s a pity, because I truly admire the ampersand. Perhaps I’ll be able to better serve it by not attempting to write it.

This entry was posted in Typography. Bookmark the permalink.

9 Responses to The Amperclef (or, Why I Don’t Write Ampersands)