100 Years of the Tombow Pencil Co.

2013 is a banner year for pencil-related anniversaries and publications. In addition to Faber-Castell’s libro mirabilis, the Tombow Pencil Company of Japan has marked their 100-year anniversary by issuing commemorative editions of their products such as this pencil set, as well as a beautiful book: The 100 Year History of Tombow Pencil.

The book is A4 in size and about 100 pages long, printed in color throughout. It’s full of historical photos of the people, places, and products associate with Tombow, and the stories behind their signature pencils: 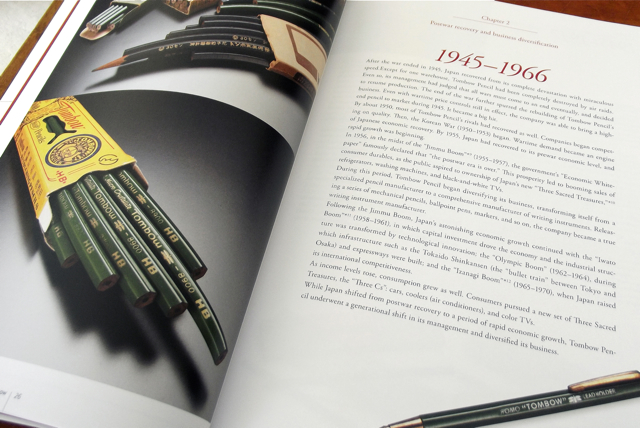 Here are a few select events taken from the text:

In addition to the very interesting history of Tombow Pencil, you also get a sense of the pencil-making industry in Japan and how it developed (something even a little more difficult to learn about than that of western Europe). For instance, there is a discussion about how the First World War interrupted pencil-making in Germany, creating an opportunity for Japanese pencil-makers: there were 25 pencil manufacturers in Japan at the beginning 1914, and by the end of the war in 1918, there were approximately 180.

But there’s much more to read about than just pencils—this book outlines the entirety of Tombow’s product lines.

Special thanks to Tombow for sending The 100 Year History of Tombow Pencil.

This entry was posted in Pencils and tagged Tombow, Tombow Mono 100. Bookmark the permalink.

4 Responses to 100 Years of the Tombow Pencil Co.