One of the things that has interested me about the Blackwing is its lifespan. It was manufactured for more than sixty years, and one has to presume that it sold well enough to warrant keeping it in the catalog. The Mongol and Van Dyke (which became the Microtomic) were around even longer but they were advertised much more, so there is the added appeal that the Blackwing may have survived mainly by word of mouth; that a certain pencil was important enough to some that they told their friends about it, and this kept it going for more than half a century.

But steel polish? From what I can tell, Polita was manufactured and sold by the Eberhard Faber Company for more than fifty years. 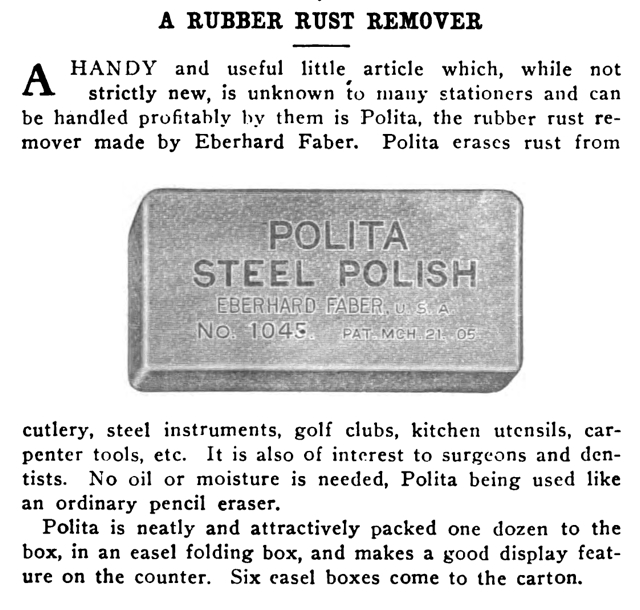 It works the same way you’d expect any eraser to work: abrasive materials, suspended in rubber or rubber-like material, abrade what they come in contact with. But in this case, instead of pumice it’s flecks of steel (it’s what today’s marketing might call an “extreme” eraser).

Polita seems to be a favorite of piano technicians since it handily removes rust from strings. It’s similar enough to steel wool but it has the added quality of being a solid block, which allows for applying more leverage. Apart from that though, I haven’t come across much mention of a product like this—but it was around for more than fifty years. (No, I’m not heralding the start of ThePolitaPages.com).

Ironically, when you add up all the elements—a rubber that removes iron rust stains—it sounds perfect for fixing the problems caused by iron gall ink.

Since breadcrumbs were some of the earliest known materials used to erase pencil marks, maybe “polenta” wasn’t too far off. 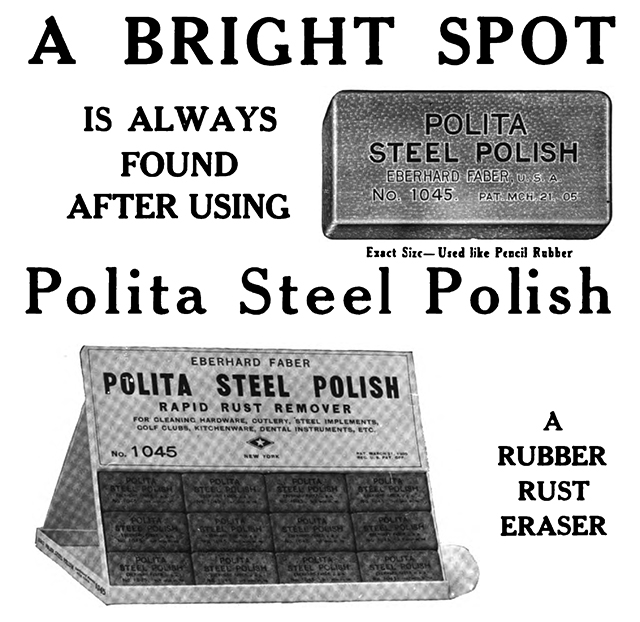 This entry was posted in Pencils and tagged Eberhard Faber, Polita. Bookmark the permalink.

4 Responses to No, not polenta.