One of the most entertaining aspects associated with vintage ads like this notice from a 1908 stationery magazine is the superlative and self-congratulatory language used by just about all of the pencil companies: 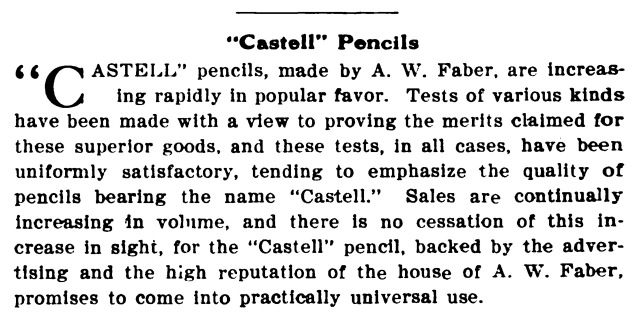 It’s reassuring to know that “tests of various kinds” were undertaken to support the claims made about these pencils. And while I’m not being cynical about what the advertising department from the U.S. branch of A.W. Faber had to say, I am just a little…curious as to what the test for “Finest Pencil in Existence” might just look like:

And you know, if the mean elevation of the Faber factory buildings exceeds that of their rivals’, the claim of “The Highest Point Reached in Pencil Making” would, in one sense, be demonstrably true.

We might excuse this kind of language as being turn-of-the-century advertising hubris. However, to this day Dixon Ticonderoga advertises the Ticonderoga as being “The World’s Best Pencil.”

Hmm. “The World’s Best Pencil” vs. “The Finest Pencil in Existence”; perhaps it’s time to put together a list of these claims from early 20th-century pencil-advertising, and see if we can’t crown a winner. Or maybe we should simply take Wittgenstein’s advice, as he stated in an early and lesser-known draft of the Tractatus: “That which cannot be written in pencil, must be passed over in silence.”