WAR BETWEEN THE FABERS. 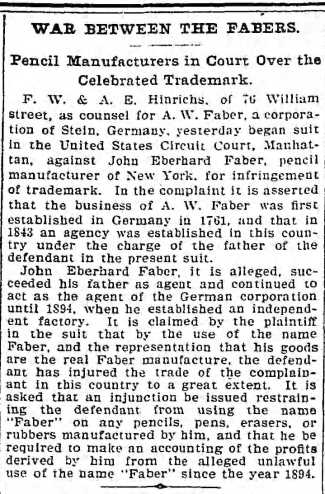 There are a lot of Fabers.

And it seems like no matter where you turn there is another Lothar or Eberhard to be found, in both the German and American branches of the family. Combine that with less-than-rigorous reporting standards, and you’ll encounter gems such as this one from a 1901 stationery trade magazine:

But, what’s in a name? As I am finding out, just about everything—beginning with a name that was changed with rather conspicuous timing.

In a previous post I speculated about the origins of an early Eberhard Faber Co. logo. That logo—reminiscent of the Faber family crest—would eventually change to the familiar-if-not-iconic diamond star. It was a big change, one that might be a reflection of the legal turmoil in which the two branches of the family were engaged. Questions persist though: Why would Eberhard Faber—who received the blessing and support of his brother Lothar—come all the way to America just to start causing trouble, or at least, what precipitated the behavior leading up to the split? Were the German Fabers being a little too picky about the use of “E. Faber” on America products? It turns out it there was a lot more to it than that, and it’s perfectly understandable as to why they were upset. And it wasn’t Eberhard Faber pushing the buttons, rather, it was … Eberhard Faber. First, a few vital statistics to orient you:

Eberhard Faber I was born in 1822 in Germany and came to the U.S. in 1849 at the behest of his brother Lothar, to run the American office of A.W. Faber. He died in 1879 aged 57, after which his son John Robert Faber (b. 1859) took control of the company—he was only twenty years old. Now, the reason we don’t hear much about John Robert Faber is because he legally changed his name, to Eberhard Faber II (a.k.a. John Eberhard Faber).

From the Laws of the State of New York (1880), an entry confirms the acceptance of the name change:

Eberhard Faber I died in March of 1879; John Robert’s name change took effect on June 1st, 1879, some three short months after the death of his father. The lawsuits with A.W. Faber at this point were still some twenty years away, but it’s Eberhard Faber I who is often mistakenly associated with them, if for no other reason than the name “Eberhard Faber” could have referred to two people and one company at the time.

Back to the logo
There is still the matter of the Eberhard Faber Pencil Company logo to decide. The example I first came across was found on the 1899 packaging for their Van Dyke Drawing Pencils. At this point it remains a very poor-resolution copy but you can still pick out the main features: two six-pointed stars and a craftsman wielding a hammer in one hand and the object he is hammering in the other. This compares favorably with an extract from the Faber family crest of 1862 (right): 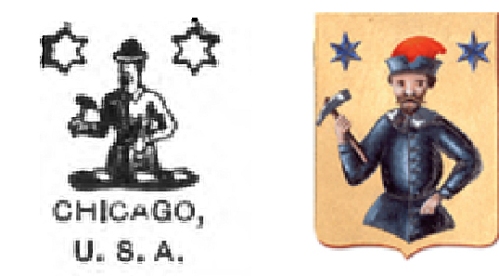 Here is another logo for the Eberhard Faber Company c. 1882:

It’s more fully fleshed-out and appears more like a family crest than a logo. Compare it to the full Faber family crest from Germany: 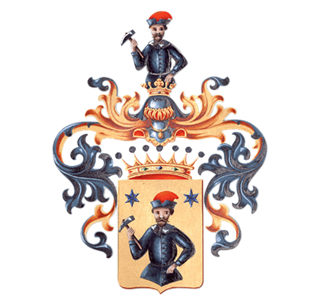 And now a question that will be revisited when the matter of the lawsuit is brought up: Is the more elaborate American Faber crest meant to be an emulation of the German Faber crest but only to a certain extent? In other words, were they trying to capture the “look and feel” of the German family crest while adding just enough variety to make it their own? Or in less charitable terms, did the American Fabers want people to think “German Fabers” when they saw the crest/logo?

As we’ll see in the next installment, the similarities found between the labels of Eberhard Faber products and those from A.W Faber in Germany during this time were not innocent mistakes, and the 100-year-old lawsuit that resulted from them is still referenced in case law today.

This entry was posted in Pencils and tagged A.W. Faber, Eberhard Faber. Bookmark the permalink.

5 Responses to WAR BETWEEN THE FABERS.