This Eberhard Faber flat pocket pencil has got me wondering something. It’s similar in design to countless other versions made by the company but this one has a clamp eraser, and the patent date for the clamp is embossed on the body of the holder. This means that 1921 is the earliest possible date for its manufacture (NB: the eraser is slightly larger than those used for clamp-bearing pencils like the Van Dyke and Blackwing.)

Here is an advertisement for an earlier version of the 1548, which had a slightly different finish, but take a look at the eraser:

It looks like there is a clip holding in the eraser, just like with the clamp design. The thing is though, the advertisement is from 1902.

It’s not unusual for products to enter the market prior to their patent or trademark date, but 19 years ahead of time is a bit much. There were previous designs on the lead-up to the clamp, such as this one: 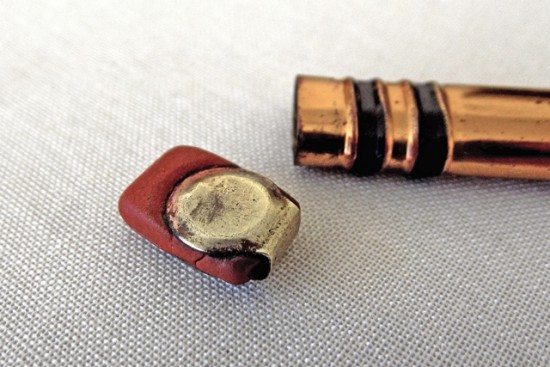 And it may be that the illustration is of something similar, but it has me wondering how long it took Lothar Washington Faber to finalize his design.

This also means that flat pocket pencils were being manufactured at least up until 1921; when did they finally fall out of favor?

This entry was posted in Pencils and tagged Eberhard Faber, Pocket Pencil. Bookmark the permalink.