The House That Faber Built

That’s what I kept saying to myself on a recent rainy afternoon in Wilkes-Barre (BEAR or BERRY, there doesn’t seem to be a consensus), waiting outside of my hotel. I was trying to take my mind off what was about to happen, that I was meeting Eberhard Faber for dinner. In a lot of ways it was like my visit to Stein and meeting Count von Faber-Castell; a combination of excitement and disbelief. For a brief moment I wondered how many people have had the opportunity to speak with both of them, about the history of their families and companies. I came a little better prepared this time: some binders of research material, a bound hardcopy of “No Ordinary Pencil“, and four handwritten pages of carefully considered questions.

I never asked a single one of them.

Don’t get me wrong I asked about plenty of things, it’s just I realized right away that unloading seven to eight years’ worth of questions would have exceeded the bounds of courtesy, or at least comfort. Instead, for this visit I should for the most part just look and listen.

I like that our meeting was setup the old-fashioned way, and by that I mean through weekly (landline) phone calls, no e-mails or text messages. I can only imagine what Mr. and Mrs. Faber could have been thinking — who is this person who is interested enough in the company’s history that he’d come all this way? But then they did another old-fashioned thing: they welcomed me into their home and offered me their time, something mostly unheard of today.

After lunch we made our way back to the attic, where I spent most of the day. In no particular order I would slowly make my way through documents and photographs dating back to the early 1800s, and any number of company items you’d associate with the second half of the twentieth century. There were very few pencils, but what was there was telling:

Searching online through patent databases has yielded a great deal of historical information. I’ve read through many, many pages of PDFs, and each new discovery has filled in another small part of the story. I was unprepared, though, when I opened a box labeled “trademarks and patents”, and saw the originals of many of those documents. For example, the patent for attaching an eraser to a pencil:

The original trademark for the Eberhard Faber Diamond Star Logo: 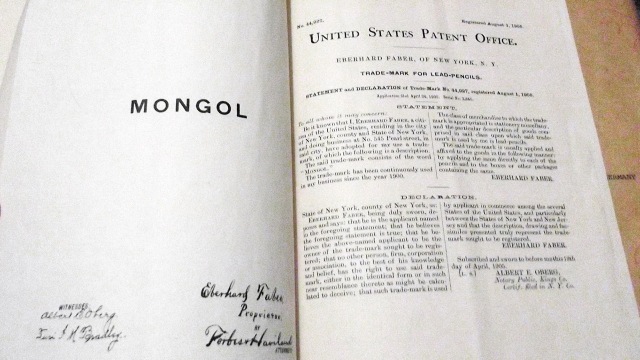 Going back even further there were ledgers from the earliest days of the Eberhard Faber Company, including this one dating back to the 1850s. Notice the transaction with A.W. Faber, and the symbol drawn at the left:

A closer view of a similar entry, all written in immaculate copperplate:

Before I knew it, nearly six hours had gone by and it was time to stop. We went to dinner at a great French restaurant in downtown Wilkes-Barre, where the only thing better than the meal was the conversation. A few hours later, I was dropped off at my hotel and flew home the next morning.

In one sense it feels like things have come full-circle, having met both scions of the Faber and Faber-Castell families. In another sense I feel like the work is only about to begin. I don’t know what will come of it yet, but I am as determined as ever to document what I can—there’s a story that’s worth telling. Sure there’s pencils, but it’s really about three brothers from Stein, Germany, and nearly 200 years of American history.

Special thanks to Mr. and Mrs. Faber for their hospitality and generosity.

This entry was posted in Pencils and tagged Blackwing, Blackwing 602, Eberhard Faber. Bookmark the permalink.

10 Responses to The House That Faber Built