The Eberhard Faber Mongol Gets Its Stripe

The Eberhard Faber Mongol is an iconic pencil, whose origins date back at least to the turn of the twentieth century. Its most distinguishing feature is the black-and-gold ferrule — a design that the Eberhard Faber Company would eventually refer to it as “the characteristic Mongol band.” But it wasn’t always so.

The following passage, taken from the minutes of the February, 1904 meeting of the board of directors (L.W. Faber, E. Faber, and E.E. Huber), states that all #482 pencils should receive a new metal tip:

It’s interesting to note that nowhere in any of the minutes (from 1898 to 1911) does the word “ferrule” appear. Instead, “caps” and “tips” are the most frequently used terms. This means that the word “ferrule” would become part of the terminology at a later time (NB: a ferrule is defined as something that either caps or joins).

Following the suggestion at the close of the minutes a trademark was filed for in June, then granted in August, some six months from the time of the board meeting:

The characteristic Mongol band would eventually be found on a dizzying number of products, and would undergo a multitude of design changes over some 80+ years: 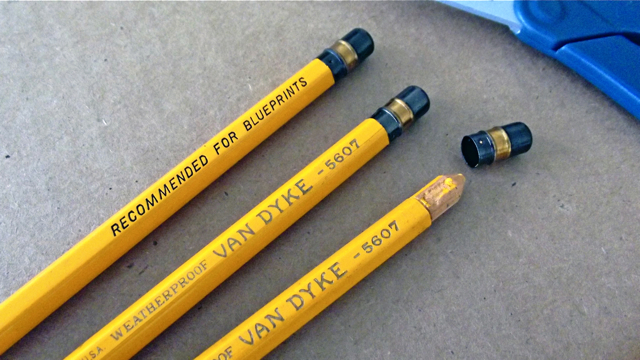 2 Responses to The Eberhard Faber Mongol Gets Its Stripe