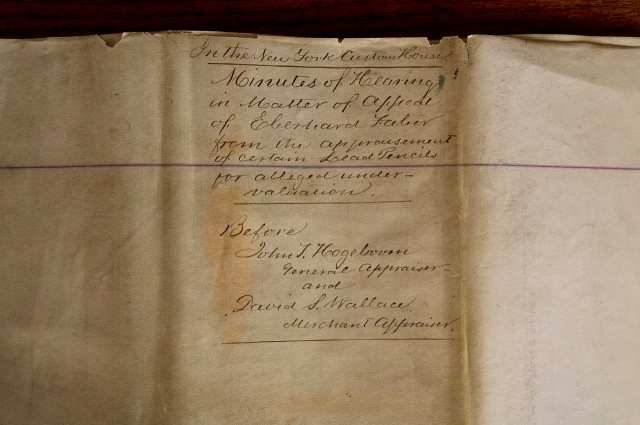 In 1871 Johann Eberhard Faber (1822-1879) appealed a decision, made by the United States Custom House (of New York), that he undervalued the merchandise he received from A.W. Faber in Stein, Germany. Though Faber had been manufacturing his own pencils since 1861 he still imported premium products from Germany, acting as A.W. Faber’s agent in America.

The photo above is of the cover page to the handwritten minutes of the hearing, totaling some 45 pages. Prior to arriving in America Eberhard Faber studied law, so it is no surprise that his responses are direct and to the point. But it is his command of the English language—something crucial under such circumstances—that is remarkable.

The history of the Faber family can be found in a multitude of publications, such as Faber-Castell’s extensive website. It’s become a familiar story of one generation begetting the next: 250+ years of Lothars and Eberhards and Johanns making pencils and more in Europe and the Americas. But one of the most interesting passages to be found in the minutes of the hearing, is where Eberhard Faber himself reckons his family history—a voice from the past connecting directly with the present:

“My great-grandfather’s name was Caspar Faber; my grandfather was Anton William Faber. The latter personally conducted the business till a short time before he died, which was about 1810. He was succeeded by his son Leonard Faber. He continued till 1839. When he died, my brother Lothar succeeded him. He continued alone until about 1841 or 1842.

Leonard Faber conducted the business under a name which I don’t recollect. He stamped his pencils “A.W. Faber.” Lothar conducted the business under the name of “A.W. Faber” while he was alone. He first associated a partner with him when he took my brother John about 1841 or 1842. He has not at any time had another partner in that business than my brother John.

I had no connection with the business before I came to the United States.”

2 Responses to 1871: “My Great-Grandfather’s Name Was Caspar Faber…”