Eberhard L. Faber III was the son of Lothar Washington Faber (1861-1943), and the grandson of Johann Eberhard Faber (1822-1879). During the 1920s and 1930s he coordinated between the Eberhard Faber Pencil Company based in Greenpoint, New York, and its newly-built factory in Neumarkt, Germany. In a series of letters written to Franz Barensfeld, the financial supervisor of the Bavarian factory, the day-to-day minutiae of running a pencil factory are laid bare. But among the facts, figures, and product sample requests are some fascinating passages, one of which mentions a world-historical event.

The bulk of the letter dated October 31st, 1929, deals with material concerns such as the quality of the company’s graphite:

“…one thing I particularly want to emphasize, which I have emphasized in past letters, is that the new extra graphite that you buy should be used in very sparing quantities and not until you have absolutely established that the formula is right…”

But the very last paragraph of this two-page letter begins with an ominous statement:

“We have just lived through one of the most unusual and unbelievable, fearful panics in Wall Street that has ever occurred in this country. Untold numbers of fortunes dwindled to nothing in a few days.”

Eberhard III devotes several sentences to describing the gravity of the circumstances:

“It was a regular landslide that brought with it ruin and destruction, and in no way can be even slightly exaggerated.”

In the next few sentences he summarizes the financial mechanisms that brought about the crash, but throughout the letter he never mentions whether the Fabers themselves have been directly impacted. 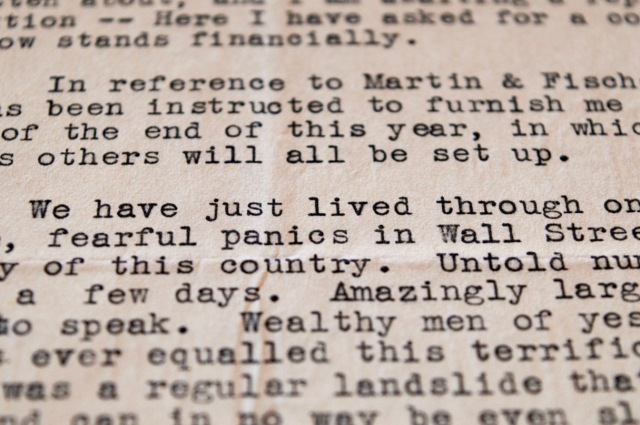 The last sentence is the most prescient, especially given how slowly and inaccurately news travelled nearly ninety years ago:

“This is bound to effect business very badly and most financiers think that we are in for two to three years’ of great depression.”

Before it became known as the Great Depression, perhaps the expression “great depression” was already in common use. Even so, it still seems remarkable to see it in writing just two days after “Black Tuesday”; the stock market crash of October, 1929.