Regarding the First Attachable Eraser (It Wasn’t Lipman), Part 1

Old News
Hymen Lipman’s name often comes up in response to a question such as: “Who was the first person to attach an eraser to a pencil?” This seems fair, and (partially) accurate—Lipman was granted a patent in 1858 for “Combination of Lead Pencil and Eraser” (US19783). 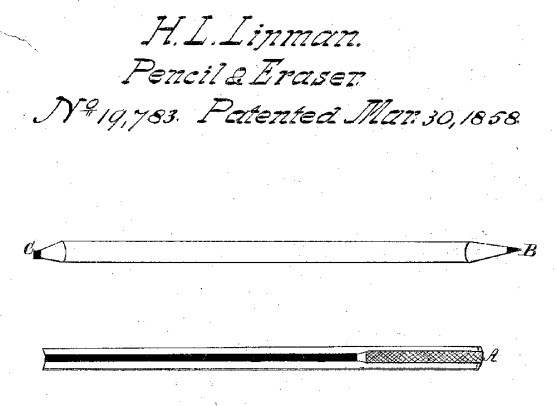 But as anyone who has read the patent knows, Lipman’s design called for the eraser to be inserted into the pencil rather than being attached to it. This distinction might seem like nitpicking, but as we’ll see, it’s the kind of distinction that’s all too important in the parsimonious world of patent law, and one of several details often missed in the telling of this story.

What follows is a selected path from Lipman’s patented design through what we would recognize today as being an eraser-tipped pencil. The path is circuitous, knotted, and brimming with acrimony—not to mention replete with some very familiar names.

This entry was posted in Pencils. Bookmark the permalink.

2 Responses to Regarding the First Attachable Eraser (It Wasn’t Lipman), Part 1