Regarding The First Attachable Eraser, Part 3

A scan of the original, handwritten decision of the court regarding J.B. Blair’s patent, 1875.

The patents for the pencils and erasers I’ve mentioned so far are only a small sample of those filed and granted between 1858 and 1900. While diverse, what many of the earlier patents have in common is that they are incremental in nature, i.e. each has a small change here or there while the foundations of the invention are more or less consistent. By securing as many patents as they could, entrepreneurs expected to secure the rights to be the sole manufacturers of such rubber-tipped pencils, and sue those who were thought to be infringing on those rights. What they did not expect to happen during the course of those lawsuits, however, was for the courts to call into question whether Lipman’s original patent was legitimate to begin with.

“We caution all parties against purchasing any rubber tips or rubber tip pencils of any shape, style, kind, or brand, or the application, or connection in any manner or form, of a piece of rubber to the end of a pencil, causing it to assume the appearance or warrant the name of a rubber tip pencil; unless such goods are licensed under one of the above mentioned Letters Patent, or are labeled with the stamp of the Company.”

An injunction was issued in 1869 against the Rubber Tip Pencil Company, who in response filed a lawsuit in 1870. As a result the injunction was dismissed that same year. The Hoveys later appealed, but lost.

An interesting part of the Hoveys’ strategy was to call into question whether Lipman’s patent (which was owned by Reckendorfer, who was the treasurer of the Rubber Tip Pencil Company) was valid. The court did not render a direct opinion on that matter citing that a state court did not have the authority to overturn a patent, since patents are granted by the United States.

1872
I don’t know the precise date, but at some point Reckendorfer left the Rubber Tip Pencil Company. , I’m using that as the date. (NB: Berolzheimer, Illfelder, and Reckendorfer established a firm in New York around 1857, which was later incorporated as Eagle Pencil Company in 1868. In 1872 the company opened a plant in Yonkers, New York.) What left with him were his and Lipman’s patents, but the company retained Blair’s patent (as well as several others).

1872
Teile Müller is granted a patent for “Improvement in Attaching Rubber Erasers to Lead-Pencils” (US126224): 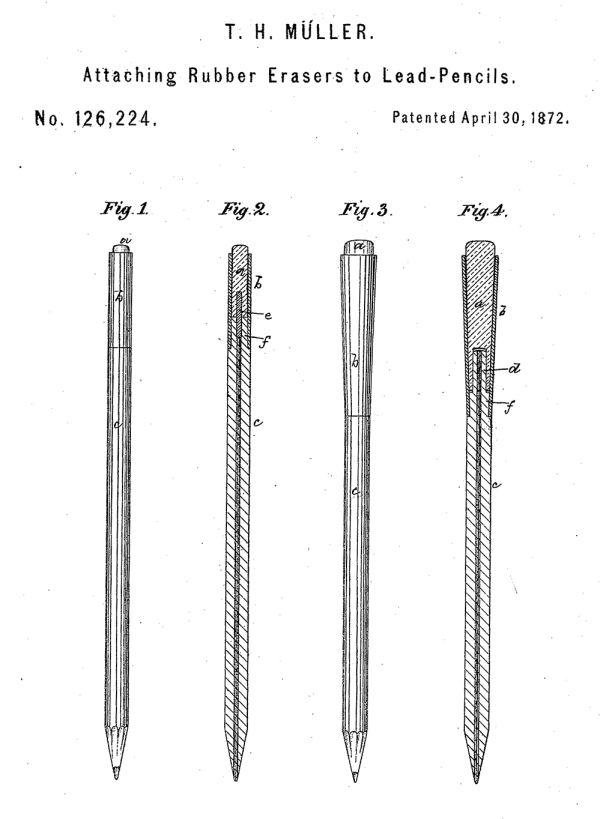 1874 (May)
Reckendorfer v. Faber. Joseph Reckendorfer, on the basis of the patents he held, sued Eberhard Faber for manufacturing products that he contended were infringements on those patents. The complaint was dismissed.

1874 (October)
Rubber Tip Pencil Company v. Howard. In part one of this series I mentioned “poor” John Blair, and this is why. The Supreme Court rendered this rather scathing opinion about Blair’s invention and patent:

“Though an idea of a person who afterwards obtains a patent for a device to give his idea effect, may be a good idea, yet if the device is not new the patent is void, even though it be useful. The principle applied to the patent of J. D. Blair, of July 23d, 1867, for a new manufacture, being rubber heads for lead-pencils, and the patent held void by being for nothing more than making a hole, smaller than the pencil in a piece of India-rubber and putting the pencil in the hole, the elastic and erasive qualities of india-rubber being known to everyone, and everyone possessing­ capacity to make a hole in a piece of rubber, and to put a pencil in the hole, so as to be held there for an eraser by the elasticity of the rubber.”

“It said further, that the article was not the subject of a patent, because the elastic and erasive properties of india­ rubber were known to all; and that no person knowing the elastic quality of rubber could be wanting in the knowledge that a piece of rubber could be made to encompass and adhere to a pencil by making a hole in it; nor could anyone be deficient in the skill requisite to make such a hole.”

“In the case we are considering, the parts claimed to make a combination are distinct and disconnected. Not only is there no new result, but no joint operation. When the lead is used, it performs the same operation and in the same manner as it would do if there were no rubber at the other end of the pencil: when the rubber is used, it is in the same manner and performs the same duty as if the lead were not in the same pencil. A pencil is laid down and a rubber is taken up, the one to write, the other to erase: a pencil is turned over to erase with, or an eraser is turned over to write with. The principle is the same in both instances. It may be more convenient to have the two instruments on one rod than on two. There may be a security against the absence of the tools of an artist or mechanic from the fact, that, the greater the number, the greater the danger of loss. It may be more convenient to turn over the different ends of the same stick than to lay down one stick and take up another. This, however, is not invention within the patent law, as the authorities cited fully show. There is no relation between the instruments in the performance of their several functions, and no reciprocal action, no parts used in common.

We are of the opinion, that, for the reasons given, neither the patent of Lipman nor the improvement of Reckendorfer can be sustained, and that the judgment of the Circuit Court dismissing the bill must be affirmed.”

1876
Cevedra Sheldon is granted a patent for “Improvement in Combined Eraser-Holders and Pencil-Point Protectors” (US178882): 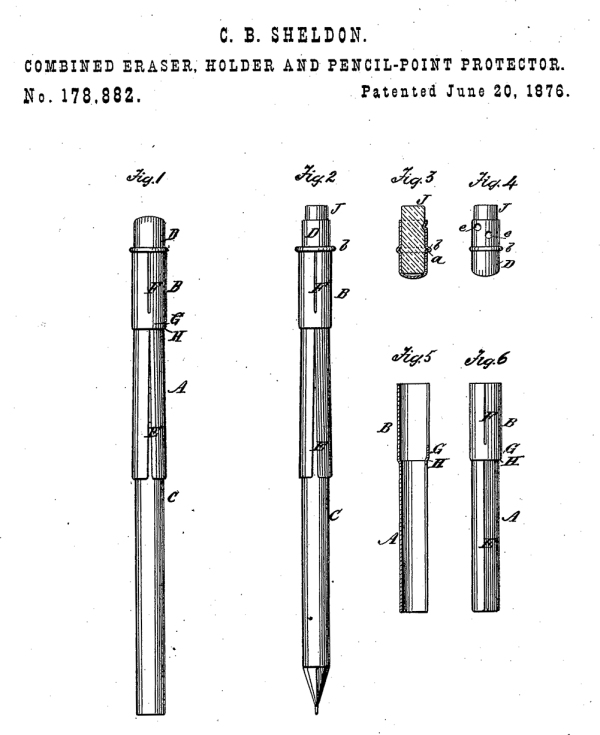 1891
Eberhard Faber II is granted a patent for “Means for Attaching Rubber Tips to Pencils” (US457579). For a time, I was fortunate to have had the original patent in my possession: 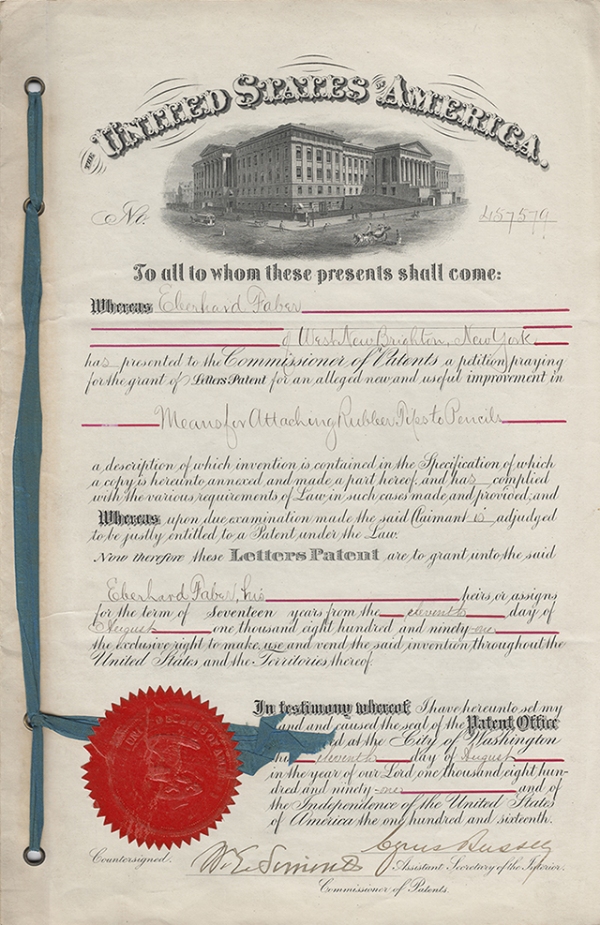 This patent marks the arrival of a now-familiar design—the ferrule and eraser: 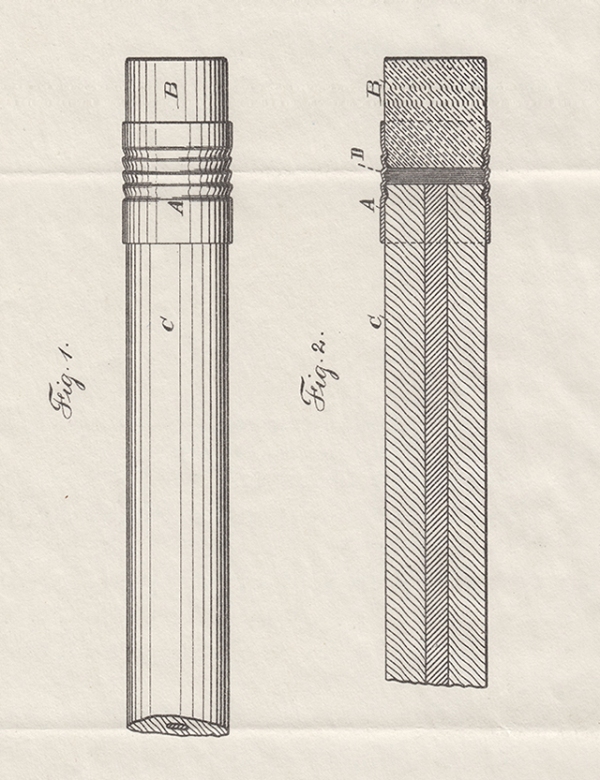 If we were to take this one patent out of context, it would be easy to say something like: “It’s the first patent for an eraser attached to the end of a pencil.” In fact Eberhard Faber II is often credited as being the first person to attach an eraser to the end of a pencil by means of a ferrule. A claim such as that might be alright for a CV or a company biography, but as this series of posts has hopefully shown, closer examination requires us to consider that all of these inventions are part of a continuum of ideas.

Yes, it’s easy and convenient to say that Hymen Lipman was “the first person to attach an eraser to a pencil”, but it’s also inaccurate in a sense. And perhaps a little lazy. On the other hand, it’s also clumsy to have to parse, mince, and qualify common words in order to arrive at a more accurate version of the story. This is especially true when the difference in meaning between words like “combined” and “attached” only seems important to patent attorneys. But by eschewing the details—and by extension the truth—the rich tapestry of the history of writing culture becomes increasingly threadbare.

4 Responses to Regarding The First Attachable Eraser, Part 3